Back in December of 2009, I travelled to Denton, Texas to watch my oldest daughter Paige graduate from the University of North Texas. We had a grand time there, especially on the Denton County Courthouse square, with all the touristy type stores decked out for Christmas. And that used bookstore! You see, Denton, like many small Texas towns, had a opera house on the Square ages ago. This one, like all similar opera houses in Texas I know of, had fallen into disrepair. So it was converted into, at present, a huge bookstore. What a wonderful place to browse in!

I had also heard that there was a very interesting street sculpture just east of downtown Dallas of a banjo man. Armed with information from the Internet, I set out to find him on 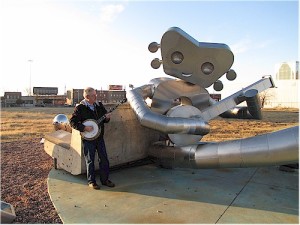 the way back, and sure enough, there he sat in the Deep Ellum District at the southwest corner of North Good Latimer and Gaston Avenue. Quite an imposing figure, I have a few photos of him here, along with yours truly picking a number with him.

The Deep Ellum district in Dallas was once a famous venue for Blues musicians. It appears its renown has diminished in recent decades, though. 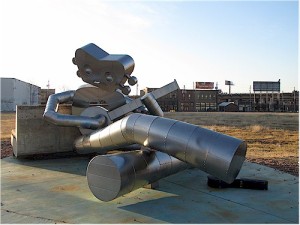 And alas, when I went to Google street view just now, the Banjoman is barely seen on the higher-altitude view, but in the street view (seemingly newer as the trees are bigger), it appears that some construction is going on at that corner. Could it be he has been removed?

There is another similar ‘tinman’ elsewhere in Deep Ellum, two blocks northwest at Good Latimer and Miranda Street; this fellow appears to be a singer, not a banjo player.

Click on these images for a slightly larger photo.

I'm from Huntsville, Alabama where I work as a Software Engineer and part-time banjo instructor. My wife Miiko and I worship at Rivertree Downtown. I've been playing various instruments since my teen years. I started mandolin and dulcimer at about age 17 and banjo at 20. I love just about all kinds of music. In terms of banjo styles, I play and teach Scruggs, melodic, clawhammer, and 2-finger styles. I'm also very keen on theology, being a Trail Care Partner with the Land Trust of North Alabama, photography, urban planning, architecture, astronomy, ATM (amateur telescope making), birding, martial arts, and about 30 other distracting hobbies to a (mercifully) lesser extent.
View all posts by Pgibson →
This entry was posted in Banjos and Society, History and tagged Banjoman, Dallas, Deep Ellum, Denton, Gaston Avenue, Good Latimer. Bookmark the permalink.