Last week, I blogged on Huntsville’s ‘Heaviest Corner’; the place in downtown Huntsville, Alabama that had the greatest density concentration. Since then, I’ve had a few additional thoughts, so I’d like to look further into that topic here. Here are some factors to consider when talking about urban density, especially in downtown Huntsville.

Not the Only Corner in Town
So the corner of Holmes Avenue and Greene Street isn’t the only place that has a greater sense of urban density about it these days. Much of Washington Street, as well as Clinton Avenue from the VBC to Washington Street, is starting to have a more downtown look to them. Looking ahead, so too will any place inside of City Center and Clinton at Jefferson when the Hyatt House is finished (but it has to get started first!)

Some folks might point to the corner of Holmes Avenue and Spragins Street for the heaviest corner in Huntsville, as that corner has the Regions Bank Building at 12 stories and the old Russel Erskine Hotel, also at 12 stories. However, that corner only has two buildings, not a completed set of four. That makes it feel more open, even though two corners are already built up. Plus, they only add up to 24 stories. However…if some developer ever puts up even a 6-story building on either of the vacant corners, then Clinton & Spragins would replace Holmes & Greene as the reigning champion, even with only three corners completed.

Corners versus Elsewhere
Many of these more dense places aren’t actually on a corner as Holmes and Greene is, so it is a bit of an odd comparison if we look at them in terms of a ‘heaviest corner’. For example, the Embassy Suites Hotel, the new Autograph by Marriott, and the Curio by Hilton all are in the middle of a block. Yet they add to urban density as much as a corner building does. So I guess what we are really talking about when we say a heavy corner is simply how built-up the immediate area appears to a person standing on the street at that spot, whether it’s a corner or not.

Human Scale
Human scale is desirable in modern architectural design where it may be seen as being the opposite of an automotive scale. Think one big parking lot out front as opposed to several small parking lots in the back of each store. Human scale can also be defined as the distance from which someone on an upper story can still have a conversation with someone on the street. Usually this is no more than 3 stories¹. But for this specific purpose of perceived urban density, we aren’t concerned with transportation or with a sense of community. It is simply the perception of how built-up a specific spot is. So with that as a definition, I’d say we lose human scale when we start to get up very roughly around 20 or 30 stories. In other words, we can perceive a difference between a 5-story building and a 15-story building, but 40 and 50-story buildings are just way too tall to notice much difference between them close up.

Qualitative Perceptions
In other words, things that are not really measurable, like how busy the street is, are there shops on the ground level and possibly the second story, and the presence or absence of signs, posters, marquees and other such distractions, pleasant or otherwise. I believe the more of any of these elements tend to cause us to perceive a more dense environment.

Building Setbacks
Another less quantitative consideration in urban density is the setback of a building. More modern buildings may or may not have more of a setback. This was not the style in the 1930s and 1940s, such as we see locally in the Russell Erskine Hotel and the Times Building. A setback will reduce the feeling of density, which may be a good thing or a bad thing, depending on the goal of the designing architect.

Why Not Map Them all?
As a matter of fact, all this got me to thinking. How do other corners around the downtown area stack up in terms of being ‘heavy’? So I put together a brief map detailing all the corners with a combined value of 10 stories or more. Holmes & Greene seems to be the only one with substantial buildings on all four sides, so I’ve included others here with just two or three buildings. I’ve also included ‘non-corners’ in green numbers in the map below such as directly across from the VBC Arena entrance and inside City Center when it is finished. Green question marks, three of them, indicate future construction that we know about but don’t really have a firm idea of how dense they will look yet. Any surprises that you see here? Anything I’ve over-looked? 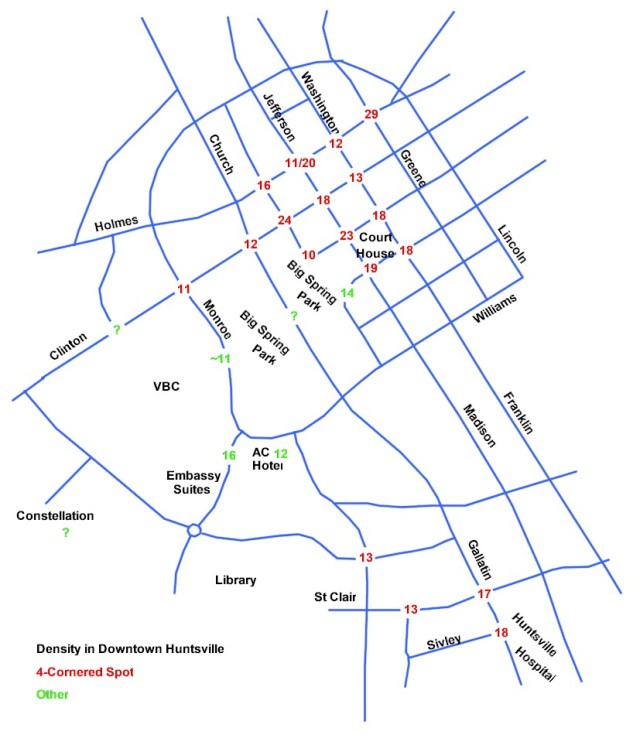 A few things are note-worthy here.