Should I Always Wear My Finger Picks When Playing the 5-String Banjo?

When I first learned to play the five-string banjo (not the second time), I read the admonitions to always wear your finger picks. I kept to this rather faithfully, but there were a few occasions when I would just pick up the banjo, usually sitting on the couch like a house cat waiting to be petted, and start strumming. This was usually a one-time thing, so no harm done. 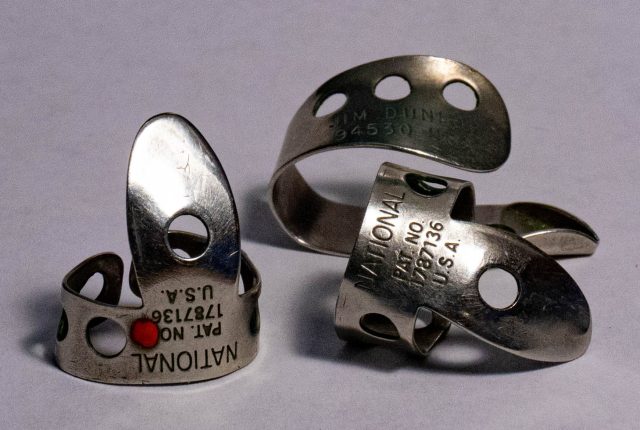 The worse I ever did however, was to get into the habit of not playing with picks for a couple of weeks. And that is where the difficulty arises, as the loss of skill is very subtle – you won’t ever notice that you can’t play with picks anymore until you try to play with them again. After that amount of time, it was a pretty noticeable and disconcerting feeling.

But it had a happy resolution as it just took like 2 or 3 days of practicing with picks to get back the ability.

So the question is: just how much harm is it to your banjo playing to not use finger picks? Of course, I’m including a thumb pick in this discussion as well; I’m just referring to it as a finger pick for convenience sake. I’m also referring just to ‘modern’ styles: Scruggs, Melodic, and Reno (or single-string) styles. Clawhammer and Two-finger styles do not use picks on purpose.

You have heard the adage about how you can break the rules after you learn why the rule is there in the first place? I think it certainly applies here, and the lesson-learned for me after that two-week pick-less stint demonstrated to me why the rule is there. The take-home for me was this:

You can indeed play without finger picks, but do not expect yourself to be able to tell when enough is enough – you cannot perceive any changes in your ability to play with or without picks without switching back. Because you can’t perceive it, you’ll have to limit your pick-less playing to only occasionally and then just for short periods of time. Any more and you can really start to get comfortable with the feel of no picks.

But that brings up perhaps the more relevant question of why you want to play without picks. For me as a young banjo player, it was simply a matter of convenience and the occasional lack of self-discipline.

For others, it may be an underlying issue. Maybe the picks aren’t fitted properly, or they are being worn incorrectly, or they are painful, or any number of other reasons. At that point, it’s advisable to ask a banjo teacher. Hopefully, he or she can set you up and get you back on the way to gainful practice!

I'm from Huntsville, Alabama where I work as a Software Engineer and part-time banjo instructor. My wife Miiko and I worship at Rivertree Downtown. I've been playing various instruments since my teen years. I started mandolin and dulcimer at about age 17 and banjo at 20. I love just about all kinds of music. In terms of banjo styles, I play and teach Scruggs, melodic, clawhammer, and 2-finger styles. I'm also very keen on theology, being a Trail Care Partner with the Land Trust of North Alabama, photography, urban planning, architecture, astronomy, ATM (amateur telescope making), birding, martial arts, and about 30 other distracting hobbies to a (mercifully) lesser extent.
View all posts by Pgibson →
This entry was posted in Beginning Banjo, Teaching, Tips & Techniques and tagged 5 String Banjo, Playing Without Picks, Scruggs Style, Wearing Finger Picks. Bookmark the permalink.

2 Responses to Should I Always Wear My Finger Picks When Playing the 5-String Banjo?